BETHLEHEM (Ma’an) — Two Israeli soldiers and eight Palestinian youths were injured as clashes with Israeli forces in Aida refugee camp north of Bethlehem continued for a second day on Sunday.

Locals told Ma’an that Israeli forces raided several houses in the camp, taking them over and using them as military posts while firing tear gas grenades throughout the camp.

Witnesses in the camp said that two Israeli soldiers from the border police were injured in the camp after Palestinians threw bricks at them from a rooftop near the camp school.

Israeli forces opened fire at the camp after the incident, and called for reinforcements in order to evacuate the injured soldiers.

Director of emergency services Muhammad Awad said that eight Palestinians were injured with rubber bullets during the clashes, one of whom was shot in the head with a rubber-coated steel bullet when soldiers opened fire on protesters. He was later evacuated to the hospital.

Israeli forces also opened fire on the car of Associated Press photographer Iyad Hamad as he was covering the clashes.

15 individuals suffered from excessive tear gas inhalation during the clashes.

Soldiers also inspected vehicles in camp and prevented the movement of locals, despite the heavy presence of tear gas in residential areas.

Israeli police spokesperson Luba al-Samri said that Palestinian youths threw “improvised explosive devices” and Molotov cocktails towards members of the border guard near Rachel’s Tomb, and confirmed that two border guards had been wounded after being struck by rocks and empty bottles.

The clashes come a day after heavy clashes in the camp, as locals protested against Israeli forces’ killing of three Palestinians during a raid in the northern West Bank city of Jenin on Saturday.

During those clashes, Israeli forces detained three journalists and tried to use them as “human shields,” one of the journalists told Ma’an.

Aida camp is a frequent site of clashes because it is located beside Rachel’s Tomb, which is surrounded on three sides by the Israeli separation wall despite being in the middle of the Palestinian city of Bethlehem.

Israeli forces shot more than 20 youths with rubber-coated steel bullets and live bullets during clashes that occurred almost daily in December and January, and clashes continue to break out occasionally in the area.

There are 19 refugee camps in the occupied West Bank, within which live about a quarter of the 771,000 registered refugees in the territory.

More than 760,000 Palestinians — estimated today to number 4.8 million with their descendants — were pushed into exile or driven out of their homes in the conflict surrounding Israel’s creation in 1948. 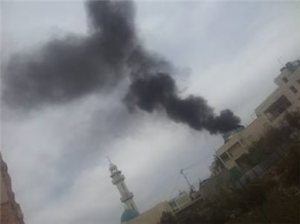