The attack totally destroyed an external atrium of the shrine, which is where Christians believe Jesus fed the 5,000 in the miracle of the five loaves and two fish.(AFP/Menahem Kahana)

The Church of the Multiplication at Tabgha on the shores of the Sea of Galilee is where many Christians believe Jesus fed the 5,000 in the miracle of the five loaves and two fish.
“During the night a fire broke out at the Tabgha church,” a police statement said, indicating that police and fire service investigators were examining the scene.
“Graffiti in Hebrew was found on the wall of the church.”
A member of the Roman Catholic Benedictine order, which manages the site, said one of the buildings within the compound was completely destroyed in the blaze but the church itself was not damaged.
The Hebrew graffiti, which was found on another building within the complex, was part of a common Jewish prayer which says “idols will be cast out” – or destroyed, an AFP correspondent reported.
Police spokesman Micky Rosenfeld said two people who were in the compound at the time were taken to hospital suffering from smoke inhalation.
“There’s a strong possibility that it wasn’t an accident,” Rosenfeld told AFP.
Father Matthias said an external atrium was “totally destroyed” in the blaze.  “The church, thank God is in good condition,” he told AFP.
“We’re very happy that nothing happened to the church.”
Wadie Abu Nasser, an adviser to the Roman Catholic Church in the Holy Land, said the apparent arson attack would reverberate throughout the Christian world. 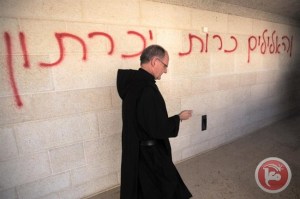 A priest walks past a graffiti reading in Hebrew “idols will be cast out” as he inspects the damage at the Church of the Multiplication at Tabgha, on the shores on the Sea of Galilee in northern Israel, on June 18, 2015. (AFP/ Menahem Kahana)

German envoy ‘shocked’
“Israel’s global image will be harmed,” he told Israeli public radio.”When you put one and one together, between the graffiti and the arson, you can reach a conclusion regarding the potential suspects.”
Tabgha was subjected to a previous attack in April 2014 in which church officials said a group of religious Jewish teenagers had damaged crosses and attacked clergy.
There has been a long line of attacks on Christian and Muslim holy places in Israel, in which the perpetrators are believed to have been Jewish extremists.
“I absolutely condemn such acts,” Israel’s deputy foreign minister Tzipi Hotovely said in a statement.
German ambassador to Israel Andreas Michaelis said he was “shocked” by the incident.  “I strongly condemn this attack and every form of violence” against places of worship or people working in them, he said in a statement.
“Religious institutions must be as well protected in Israel as they are in Germany and Europe.”
In April, vandals smashed gravestones at a Maronite Christian cemetery near Israel’s northern border with Lebanon.
That incident prompted Israeli President Reuven Rivlin to meet church leaders and pledge a crackdown on religiously inspired hate crime.